I do apologise, but this site is only in Dutch and it will stay that way in the future. Shit happens. There are some typical Dutch features which would be impossible to translate and otherwise, it would take far too much time to translate all the text I have already written. And then again, I'm quite terrible at writing English, though I'm alright at speaking the language. But don't be discouraged, you can still take a look with this tiny dictionary Dutch and Guidjian (my own personal dialect, almost extinct).

Jaarlijstjes = Year End's List of Favourite cd's. A must for a music addict as I am
Landenwoordzoekers = Puzzles in the shape of a country. You get the idea when you see them
Jaartallenraadsel = A crossword. Not with words, but with years. For all you historians with too much spare time
Concertpagina = Concert's page. All the concerts I've visited. Mostly Dutch, but also loads of British and American stuff
Nachtradio = Radio at night. A paper I wrote about the people that produce radio at night, the history of it and why (I think) it is important
Folkwoods = A very nice local music festival that I wholeheartedly recommend to all you folkies out there. I try to do some PR work for them, so that's why I'm so enthusiastic about it ;-)
9999 ZZ = The 'highest possible' postal code in the Netherlands. And guess what? It's even in use. Well, sort of
Hoezenquiz = Try to guess the title and the name of the artist (or band) of the LP or cd cover. Only a few Dutch artists and bands, so you should be OK there
All Stars = Come on, you English speaking people know these cool shoes, don't you?
Nieuw-Zeeland = That's obvious, it means New Zealand. Actually, New Zealand was named after Zeeland, a Dutch province. Mainly photos of my journey through this awesome country
80's Onverantwoord = Literally it means 80's Irresponsible. A response to a Dutch compilation released in 2002. That one was called 80's Responsible. It's much more fun to make a list of the more campy stuff that was released back then. Lots of Dutch music too, but that's because the Dutch have had a terrible trackrecord when it comes to popular music
Rechts = Weblinks are sort of obligatory on websites, so I simply had to. Links is also Dutch for Left and because of a big interest in politics I thought it would be funny to place it next to a weblink called Rechts, which is Dutch for Right (or right-wing). It's linked to a fake letter I did not send when I was moderator of the stand.nl forum. Stand.nl is a Dutch radio show where every Joe The Plumber or Jane Doe can phone in and give his or her opinion. And the forum is sort of taken over by all sorts of extreme right-wing types. As a moderator, every now and then I had to ban some of them for a couple of weeks (mainly because of racist remarks), angry e-mails sent to me with accusations of me being some sort of communist as a result. And well, they're partly right. For being a journalist, I just have to be left-wing (you probably need to live in the Netherlands to understand that remark)

And the webpage for my photos is at flickr and I decided to have that part in English. So in the end, there is a very tiny part of my website in English.

So there you have it. Any other questions? Feel free to send me an e-mail. 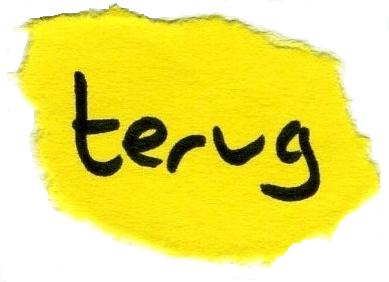